YouTube is one of the world’s largest internet browsers, receiving over 1 billion unique visitors each month. But, despite its strong traffic, YouTube is a fiercely competitive platform for the aspiring video maker. Every minute, one hundred hours of new content are added to the site, and the upload rate increases 50% per year, a trend that doesn’t seem to be abating. It is easy to see how a video can get lost and never be seen by anyone beyond the creator and their friend and family fan base.

However, getting a video to be seen on YouTube isn’t that difficult. When it comes to content creation and channel management, YouTube can be addressed a bit like science itself, applying a standardised method to each video and its subsequent existence on the platform.

Here is a summary of tips and tricks that can help make videos more successful on YouTube and exploit this platform’s potential as an innovative medium for science communication.

Format. As with any form of communication, rule #1 is ‘understand your audience.’ The typical YouTube viewer watches videos that are around 2–4 minutes long, get to the point straight away, are fast paced and generally excite in some way. This means that within the first 30 seconds you need to have engaged your audience; long introductions to a topic are not possible, your audience will soon have moved on. If you have lots of material to cover, break the video down into several videos and create a series instead.

Slick production techniques are not valued by the viewer as highly here either. Many of the successful YouTubers record most of their footage using web or mobile cameras and do not apply traditional editing techniques (such as continuity) to their films. Roughly edited, jumpy footage helps create the fast pace needed and to some degree adds to the personal, authenticity of the videos.

Content. This should be both entertaining and informative. Most importantly, it shouldn’t feel forced on the viewer. Authenticity and the personal will inspire the audience’s engagement and interaction with the content. Ideas are more valuable than a big budget.

Storytelling. In this sense, YouTube videos are no different to any other form of media. You must have a story. Using the Pixar Pitch as a starting point might help. This is a structure of storytelling that involves 6 sequential sentences:

This will allow you to create emotional content, and it is often an appeal to emotion that often triggers virality. This approach can be applied to any type of video, even something as straightforward as a lecture. Think TEDTalks. They film their speakers as if they were rockstars—these lectures are never dull.

Being successful on YouTube does not end at the video upload. Your beautifully audience-friendly video will not get seen unless the video is correctly optimised and it is being placed on a properly managed YouTube channel. Correct optimisation makes a video findable and helps it to rank higher in the YouTube search engine.

Keywords are used in searches and they should accurately describe your video. Keywords are assigned through tags, and should also appear in the first 5 words of the video title and description. Tagging your video with ‘Lady Gaga’ may increase its appearance in YouTube searches, but deceiving your viewers about what is in the video never wins long term viewership.

Thumbnails are the small picture that appears in the search results. It is amazing what a difference a good thumbnail can make. Make sure the picture is bright, intriguing and gives an impression of the video.

Annotations can be added within the video to link out to other material. This device is mainly used as a ‘call to action’ to encourage viewers to view more videos on the channel or to subscribe to the channel.

A well optimised and maintained channel increases your channel’s status within the search algorithms. Videos that appear on these channels are more likely to be ‘suggested videos’—those that YouTube thinks a viewer will want to watch next based on their previous videos watched—and receive organic viewership.

Another rewarding feature of a correctly optimised channel is increased viewer subscription to the channel. Subscribers are key to the long term success of the channel as they actively return to the channel to view new content. Subscribers also watch on average more minutes per video than the non-subscriber. Although focus is often placed on ‘views’ to mark a video’s success, the time watched is actually a more appropriate indicator. 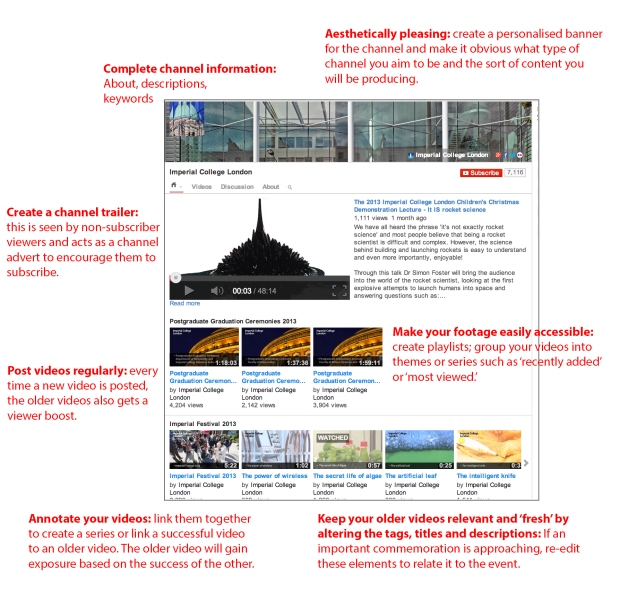 Elements of a well maintained channel.
These suggestions should increase a video’s success on YouTube. Nevertheless, they are guidelines rather than hard fast rules. Success on YouTube holds a certain degree of trial and error, playing around to find out what works best for your channel and your audience is equally important. But one thing is clear: you cannot just post a video and hope that it will get found. To maintain your audience, viewership and watch time, regular video posting and channel maintenance are essential. Just remember that there aren’t magic formulas for making a viral video. Focus on quality, style and content instead!
Jessica Rosa is currently studying for an MSc in Science Communication at Imperial College London.